ERS (Ellipsoidal Reflector Spotlights) are also sometimes known by their brand names, especially *Leko, short for Lekolite, the name given to them by their inventors, Joseph Levy and Edward Kook. ETC’s Source Four has become a very popular ERS throughout the industry, and some people use the term Source Four to refer spotlights in general. They come in many forms, and are the most numerous and important instrument type in use. The flexibility of the ERS allows them to fulfill the bulk of the lighting roles in the theatre, from area lighting to close specials, from long throws from the back of the house to shin kickers on the stage.

ERS’s may have more than one focusing lens, while all possess internal shutters for cropping the emitted light, and all accept a color gel in front of the lens and a gobo in front of the shutters. ERS’s may have bulbs mounted axially, or with the base either up or down (it is important to hang a lamp in the proper orientation). The lenses are smooth and full, not stepped, and it is the lens or lenses that move in the ERS, not the bulb and reflector assembly as in the fresnel.

The ERS improves over the efficiency of the fresnel by surrounding the bulb in an ellipsoidal reflector, with the filament of the bulb at one focus and the aperture to the lens housing at the other. The shutters and gobo are ideally in focal point of this apature. (In UK: the term ERS is not often used. An ERS is simply concidered a very good profile.) 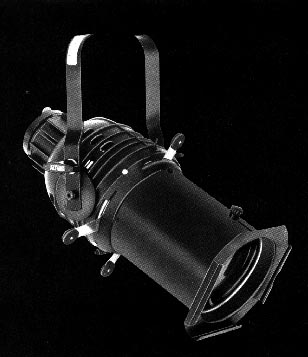 Fresnels are typically 8-, 6- or 4-inch, referring to the diameter of the lens. The lens is the distinctive ‘Fresnel lens’ type, with a ‘stepped’ appearance instead of the ‘full’ or ‘smooth’ appearance of other lenses. The stepped nature of the lens causes a corresponding pattern of circles of light, so Fresnel lenses are usually ‘stippled’ on the flat side. This pattern of small bumps helps to break up the light passing into the lens to smooth out its eventual pattern.

Fresnels use a spherical reflector, with the filament of the bulb at the focus. Due to this, the bulb and reflector cannot move independently of one another, and remain a fixed unit inside the housing. It is this unit that is moved back and forth inside the lamp to focus the fresnel. This is done by a slider on the bottom of the light, or by a worm track.

Fresnels are not very efficient. The reflector cannot be larger than the lens aperture, and thus all the radiated light that is neither reflected by the parabola behind the bulb or emitted directly through the lens is absorbed by the casing as waste heat. Additionally, the degree to which the lamp may be focused is limited by the length of the housing. The tighter the focus (‘spotted in’) the less light is able to escape. Thus fresnels are not good for tight focus on small areas. Fresnels also lack internal shutters, and must rely on barndoors, large metal flaps that may be mounted just beyond the color slot at the front of the light. Due to these restrictions, fresnels are most often used at middling distances for area lighting. Fresnel bulbs are almost always ‘base down’: mounted with the bulb up. Burning these lamps upside down will shorten lamp life significantly. (In UK: Fresnels are not spotlights, they are Fresnels.)

This is a 6″ Fresnel. The Fresnel uses a Fresnel lens, hence, its name. This unit provides a soft, circular light and is often used for back light and down light. At least in our theater. 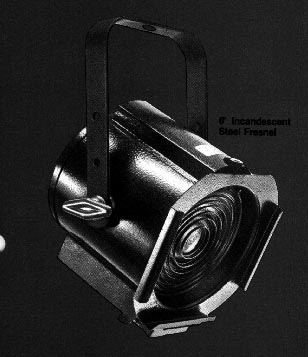 One word of caution. Please have at least two people to raise or lower this light on it’s stand. I’ve seen, too often, somebody trying to lower it and get their hand caught and pinched.

Some of our units are Altman 360 units. (left)  The difference being that they lack the Q. So?? The Q stands for Quartz which is the type of Lamp used. The Non-Q units use an Incandescent Lamp. You can tell the difference just by looking at the unit. The lamp housing of the Q unit (right) is straight up on the top. The incandescent unit’s lamp housing is shaped like a Banana, off to one side. 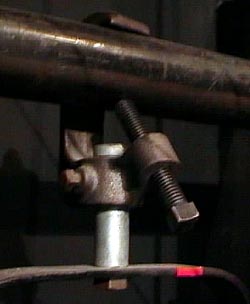 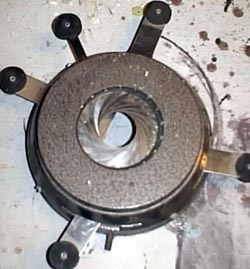 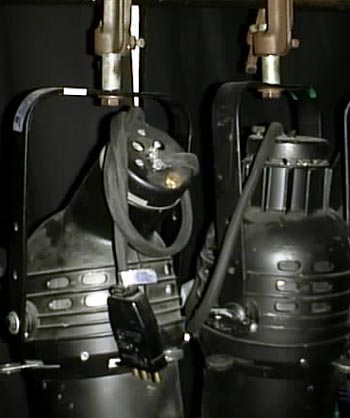 PAR (Parabolic Aluminized Reflector) lights resemble car headlights. They possess a lens, but the lens is an integral part of the lamp housing, and its position relative to the filament cannot be altered. A notable exception is ETC’s Source Four PAR, which uses the same halogen lamp as their Source Four ERS. In this case, the lens is a separate piece from the lamp. The relative position of lamp and lens remains unalterable.

The lamp produces an intense oval pool of light with soft edges. The only adjustment is a knob that allows the lamp/lens unit to be rotated within its casing, thus changing the orientation of the oval. The type of lens may be changed, options include wide flood (WFL), medium flood (MFL), narrow spot (NSP), and very narrow spot (VNSP).

These types of instruments come in varying diameters, the most common being designated PAR56 and PAR64. The number indicates the diameter of the housing in eighths of an inch (e.g. a PAR64 is eight inches in diameter).

PARs are used constantly in Rock and Roll shows, especially in combination with smoke/hazer machines which make the path of the beam visible. Because of the lack of control over the beam diameter, shape, and sharpness the PARs are rarely used in a FOH (front of house, the lighting position suspended over the audience) position, particularly in theatres, but are used often as top light and for special effects.

Strip or Cyclorama (Cyc) lights are long housings typically containing multiple bulbs arranged along the length of the instrument and emitting light perpendicular to its length. The strip light housing often contains bulbs of multiple colors (usually the primary colors) with each color controlled by a separate electrical circuit. Varying the intensity of the different colors enables the lighting designer to establish mood or time of day.

Moving lights or intelligent fixtures were originally implemented in 1972, but the first computer-controlled stage lighting fixtures began to gain widespread acceptance in the concert industry in the early 1980’s. As the digital age progressed, the cost of these fixtures was reduced and they slowly started being used in more ‘traditional’ theatrical environments. Intelligent fixtures are currently used in almost all major theatrical productions.

Usually relying on compact Arc Lamps as a light source, these fixtures generally use Stepper Motors connected to varying internal devices to manipulate the light before it escapes the fixtures front lens.

Examples of internal devices are:

The majority of these fixtures also use Stepper Motors to enable movement of the light fixtures output by either moving a mirror which reflects the beam, or by moving the entire fixture lens train. This allows the fixture to cover large areas by varying the X-Y coordinates of the beam. Higher performance fixtures use stepper motors for pan and tilt motion.

Moving lights are controlled in many ways. Usually the fixtures are connected to a Lighting Console, which outputs a control signal. This control signal sends data to the fixture usually in one of three ways – Analog (which has largely been phased out), DMX (which is the industry standard control protocol), or Ethernet Control (which is still in development). The fixture then takes this signal and translates it into internal signals which are sent to the many stepper motors located inside.