What is a Flat?

A stage flat for theater is a fake wall. Most scenic walls will need several flats to make a full wall.

A set of Broadway flats making a hallway

Scenic walls are comprised of several stage flats put together to make up the entire wall. When doors and windows are needed, door and window flats are used. The front side of flats is, well, flat. The rear side usually has exposed framing and specific hardware to allow them to be attached.

Special care is made to align the fronts so the surfaces are as smooth as possible.

What types of Flats are used on Stage?

Basic wooden stage flats are usually built in two styles. Traditional soft-covered flats are Broadway-style (as seen above), and the sturdier hard-covered flat is known as TV or Hollywood flats.

Hollywood (TV) style stage flats can quickly clamp together. They are easily screwed or bolted together along the “on edge” framing.

How to build a stage flat.

What size is a Stage Flat?

It can be any size you wish. Look at a wall in the room you are in now. What size is it? Most likely, it’s between 8 and 10 feet tall and maybe 8 to 16 feet wide. Well, your flat could be this size or bigger. Here’s the catch. Once you’ve built this huge flat, will it fit through the door? Broadway and Hollywood Flats come in various forms and sizes. Most Broadway or Theatre stage flats are built in two different styles. Hard and Soft. Hard flats are covered with thin plywood, and soft flats are covered with a cloth such as muslin, canvas, or just any other fabric. We’ll talk about the actual materials later. The cloth flats are much lighter and easier to handle; however, they appear less like hard walls than plywood-covered flats. The hard flats tend to act like real walls. If you have a small theater and the audience sits close to the set, hard is the way to go. Broadway stage flats are “framed flat,” which means the boards look like a picture frame. The corner joints need triangular pieces of plywood on the rear side for bracing to keep the corners square. Midway down the center toggle will get a long narrow strip of ply as bracing.

The corner braces are called corner blocks, and the toggle bracing is called either keystones or straps. It depends on the shape.

How to build a door flat?

Depending on the door, we have several options. For a basic door opening, aka archway, we can start with two flats for either side of the opening and then use a small flat, aka a plug, as the header. Using hinges, or other flat material, attach the header plug flat to both side vertical flats. For a sliding door, check out this page.

What book is best for building scenery? 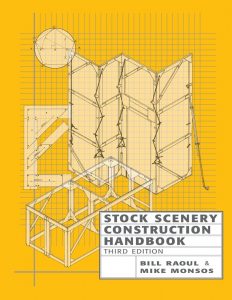 First, we need to draw a plan. This is a standard 4’x8′ frame using 1×3 laid flat. The drawing is missing corner blocks and straps but we do have them listed in the cut list to the left of the board.

Hard covered theatrical flat. Much like the soft flat in it’s framing, this flat offers a more sturdy wall surface. If actors are going to be brushing upon the walls 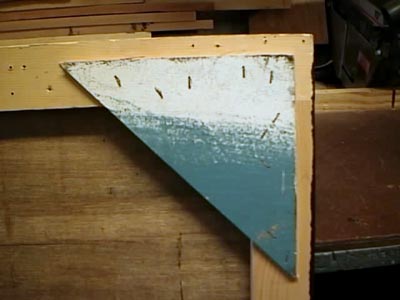 Soft covered theatrical flat. This flat is framed flat and covered with muslin. The framing is usually 1″x3″ pine laid flat, and the joints are held together with keystones and corner blocks. The muslin is glued, stapled and then sized. This photo shows the methods of building a flat.

Take a close look at the edges of the flat on the work table. You’ll see boards nailed to the table, forming a jig to hold the framing pieces in place. This allows for quick repeated laying out of the frames. 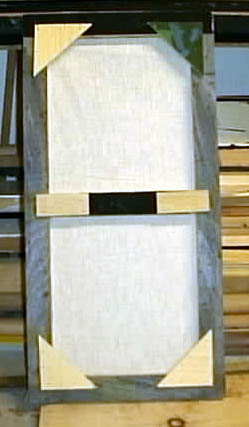 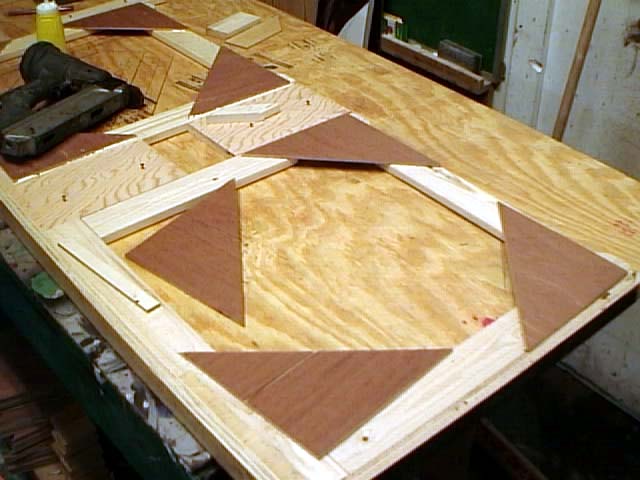 How do I tighten up muslin? Or, What is Sizing? 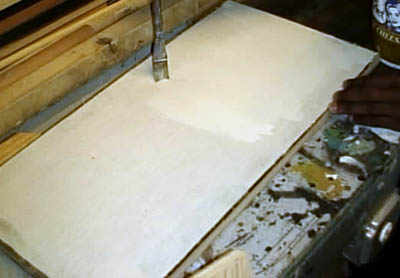 Sizing the muslin cover of a flat

What can I use instead of Size?

Instead of size, it is also possible to use watered-down paint. Basically, the way one uses sizing is to take a brush and apply, either the watered-down paint, or the sizing mixed with water, to the muslin and when finished, let it dry.

How to Seam between Stage Flats?

How do I hide the seams between my Flats?

Dutchman is a method of using a width of cloth to cover the seams between theater flats. I like to use a three to five-inch wide strip of muslin. Applying dutchman is to paint the surface of the flat with base paint just wider than the width of your strip. Then press the strip of muslin into the wet paint. Using a stiff paint brush, wet with the base paint, we feather out the edges of the muslin strip so it is flat and smooth across the seam. 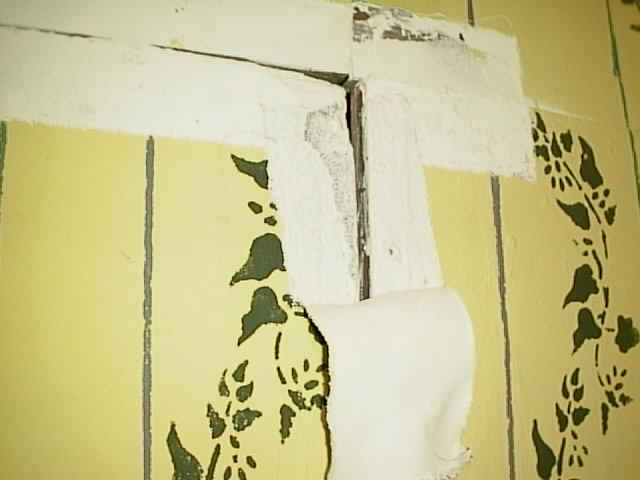 Your First Time Hanging Out with Squirrly's Live Assistant
This article has been 100% optimized using Squirrly's Optimization Assistant, which means both

What is a Hollywood Flat?

Hard-covered, Hollywood flat. This flat has the 1″x3″ framing framed “on-edge.” This flat takes up a few more inches in storage but is easier to attach to the flat next to it.

This example uses two toggles vs. the single shown for the soft-covered flats on this page. The extra toggle adds a bit of rigidity and makes it a bit more rugged.

Though you can fly these flats, they are more likely than theater flats to bump each other. To rig these, it’s best to drill down through the middle of the rails and toggles. Lifting from the middle vs. the rear keeps the unit’s center of gravity in the middle. Thus, you’ll have less likelihood of the flat leaning forward or to the rear.

Attaching these to the floor is super easy. I prefer using double-headed nails vs. screws. The nails never snap when removed. A crowbar quickly pulls the nail via its second upper head. It saves strain on your back when using a 30″ crowbar.

Hard Covers are usually made from 1/4″ plywood or sometimes 1/8″ plywood. The hard flat offers a sturdy wall surface ideal if actors are going to be brushing against the walls.

Soft covers are usually made from a cloth called muslin. To cover your flat staple muslin to one edge of the flat. Glue the width the frame on that side. Then stretch the muslin to the other end and staple it tight. Do the same to the remaining two sides.

After the muslin had been stretched onto the flat wait for the glue to dry. you can then either cut the excess muslin and leave the staples or remove the staples and cut off all muslin other than that on the surface of the flat.

Some comments & suggestions from our visitors:

Nick Spring, Markville Theatrix tells us: Another facing material can be 1/8″ to 1/4″ thin HDF (AKA FIBREX or Masonite) it provides a very smooth surface for painting (with 2 to 3 coats of a primer or with primer paper already applied) and also for wallpapering if needed. I did a production of Sandy Wilson’s “The Boyfriend” in Sept 1997 to Feb 1998 (rehearsal and show) where we needed a look of a mansion on the French Rivera in the 1920’s. The fiberboard held it quite well with a minimal water soak up and warpage (with strategically placed supports and nails/screws) There was a 24 to 48 hour drying period but can be worked with after 26 hours fairly safely with respect to surface damage. it also works out to be lighter as the board is smaller.

Flat (theatre)
Renaissance. Flats with a frame that places the width of the lumber parallel to the face are called "Broadway" or "stage" flats. Hard-covered flats with a frame

How to build a flat video.

I found a great series of how-to videos made by James McKernon and posted with his permission. He teaches theatre technology at York University in Toronto, Canada.