Scene Design and Stage Lighting (with InfoTrac )  by W. Oren Parker, R. Craig Wolf (Author)
SCENE DESIGN AND STAGE LIGHTING, Eighth Edition, continues its tradition of being the most detailed and comprehensive text available in the scenic and lighting design and technology fields. Much of the scenery design and technology section has been re-worked with an emphasis on modern technology. 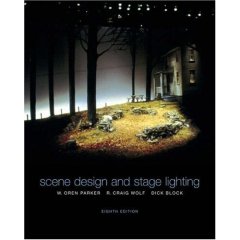 Book Description
SCENE DESIGN AND STAGE LIGHTING, Eighth Edition, continues its tradition of being the most detailed and comprehensive text available in the scenic and lighting design and technology fields. Much of the scenery design and technology section has been re-worked with an emphasis on modern technology. Changes in the lighting section reflect current practice and technology. The authors have placed an emphasis on collaboration in all sections of the new text. “Designers at Work” interviews with professional lighting and scenery designers are a new addition to the Eighth Edition. In addition, the entirely re-written section on sound for the theatre reflects the digital age we live and work in.

About the Author
W. Oren Parker inspired hundreds of designers over his very long and successful teaching career. His absolute love of architecture and furniture was obvious to anyone who took his History of Architecture and Decor class (affectionately known as “Pots and Pans,” which he no doubt thought was hilarious) if only from the sheer volume of information and detail involved. His dedication to teaching was unbeatable. Parker was born and raised in Michigan, where he met his wife, Thelma (known as Teschie).

He received his bachelor’s degree from the University of Michigan and his master’s degree from Yale University in 1940. He joined the faculty of Yale and remained there until becoming professor of drama at Carnegie Mellon University (then Carnegie Tech) in 1963. He retired in 1976. His book, SCENIC TECHNIQUES, was the first to standardize drafting for theatre, and SCENE DESIGN AND STAGE LIGHTING, written in collaboration with Harvey Smith in 1963 and now in its ninth edition, was the definitive text for designers planning to enter the profession. Parker joined the United States Institute for Theatre Technology (USITT) in 1963 and was elected a fellow in 1986, the same year he received one of the Institute’s highest honors–the USITT Award–for his work as designer, educator, and author.

In 2001, the USITT created the W. Oren Parker Scene Design Award. Sponsored by Stage Decoration & Supplies, Inc., the award is given annually to an individual who has demonstrated excellence or outstanding potential in the area of scenic design in the performing arts while pursuing an undergraduate degree. It was the first of USITT’s Awards for Young Designers & Technicians in the Performing Arts aimed at undergraduate students. R. Craig Wolf is Professor of Design and head of the design program at San Diego State University, as well as a professional lighting designer whose designs have been seen nationwide, including productions for San Diego’s Old Globe Theatre, Dance Theatre Workshop in New York, Virginia Shakespeare and the Richmond Ballet Company, Theatre Artaud in San Francisco, and the Japan America Center and Odyssey Theatre Ensemble of Los Angeles.

The author of the lighting and sound sections of SCENE DESIGN AND STAGE LIGHTING, Ninth Edition, Wolf is a past Lighting Commissioner and board member of the United States Institute for Theatre Technology (USITT) and current vice-chair of the publications committee. He became a lighting associate member of the United Scenic Artists Design Union in 1977. Wolf also has taught at the University of Michigan and University of Virginia. Dick Block has served on the faculty at Carnegie Mellon for 17 years following a freelance career based in New York City, where his design credits include “Conrack” for AMAS (nominated for an Audelco Award), “Fascinating Rhythms” for Columbia Artists (also toured), “Much Ado About Nothing” for Equity Library Theatre, and two pieces for Theatreworks USA as well as a new play, “Wilson.” He also worked on such Broadway productions as “Evita,” “42nd St.,” “Barnum,” and “Cats.” Block has been active locally with projects designed at the Pittsburgh Playhouse, Opera Theatre of Pittsburgh, and the Pittsburgh Public Theatre.

Additional regional credits include work at the McCarter Theatre in Princeton, the American Repertory Theatre in Cambridge, Mass., Center Stage in Baltimore, and Opera Theatre of St. Louis. Recent designs include “The Nerd” and Steve Martin’s “The Underpants” at The Human Race in Ohio, Feydeau’s “Silly Goose in Cairo,” “A Christmas Carol” at Virginia Stage in Norfolk, and “Saturday Night” at the Weston Playhouse. Block is also active with the United States Institute for Theatre Technology (USITT) and both regionally and nationally with the Kennedy Center/American College Theatre Festival, having served as the first National Design Chair. He is the recipient of the Kennedy Center Medallion for Distinguished Service, and he received his MFA from Northwestern University.