Perspective Rendering for the Theatre

Perspective Rendering for the Theatre  by William H. Pinnell (Author) William H. Pinnell first issues an “invitation to investigate the magic of perspective and explore its wondrous surround,” then escorts the beginning as well as the advanced student through the complex process of artistically conveying scene designs via the scenographic drawing. 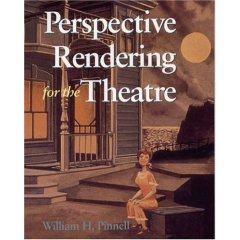 “What was moments before a dark cavernous room quickly becomes an intimate personal voyage illuminated by magic and light. Robert Sherwood spoke for the audience when he said that ‘theatre is the dwelling place of wonder.’ To a very large degree, the stage setting provides the primary visual support for that place of wonder, since it is the environment for the action of the play’s events.”—William H. Pinnell, from the Introduction

William H. Pinnell first issues an “invitation to investigate the magic of perspective and explore its wondrous surround,” then escorts the beginning as well as the advanced student through the complex process of artistically conveying scene designs via the scenographic drawing. Step by step, he illustrates the principles of perspective that apply to stage design. Starting with a brief history of perspective, he furnishes all of the information designers will need to transform a blank surface into a unique expression of theatrical space.

As Pinnell makes clear, a stage setting must be fully planned far in advance of its actual construction. Each designer must have a picture of how the setting will appear when it is ready for opening night. The scenic designer must then be able to render that picture, to communicate his or her ideas through a series of initial sketches that, combined with directorial consultation, eventually evolve into an approved plan for the actual setting. Many of these plans take the form of working drawings—floor plans, elevations, and the related schematics necessary for the shop staff to construct the design. Pinnell insists that as closely as possible, the model—the graphic and tangible rendering of the designer’s vision—must reflect what the actual stage set will look like when the audience sees it in the performance. His concern is to show how one faithfully and accurately represents the actual, finished stage design through theatrical rendering.

Except for the intricacies of the human anatomy, there is nothing a designer must draw scenically that is not covered in this book.

William H. Pinnell, an associate professor of theatre at the University of Windsor, is the author of Theatrical Scene Painting: A Lesson Guide, also available from Southern Illinois University Press. He has been teaching theatrical rendering for nearly a quarter of a century.

← The Art of Rigging Making Miniatures: In 1/12 Scale (Paperback) →