From Page to Stage: How Theatre Designers Make Connections Between Scripts and Images 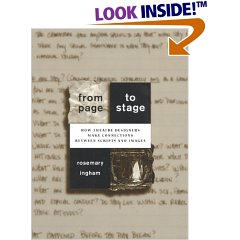 Book Description
How does a designer harness something as elusive as the human imagination to create a set that will complement and enhance a dramatic production? What steps are involved in making the jump from a script’s text to an engaging imaginative stage?

In From Page to Stage, author Rosemary Ingham explores the relationships between text analysis, imagination, and creation. Heavily illustrated with striking examples, the book covers:

Also included are photo/interview essays, in which Ingham ultimately asks the designer “how will your interpretation affect an audience/individual/society intellectually, emotionally, spiritually, and politically?”

About the Author
ROSEMARY INGHAM is a costume designer and writer. Her design work has been seen at regional theatres across the country for more than three decades.