Look of the Century: Design Icons of the 20th Century

Look of the Century: Design Icons of the 20th Century  by DK Publishing ,Michael Tambini (Author) Developed in association the Cooper-Hewitt Design Museum, the book examines the objects of our century in a clear, compelling visual format, with lots of information on the century’s leading designers and movements. 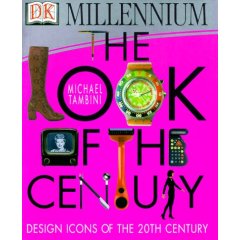 Amazon.com
Michael Tambini, founder of Pentagram Design in London, presents The Look of the Century, a thorough yet concise wrap-up of the most outstanding designs of the last 100 years. A record of human inventiveness, as well as of human consumption, this weighty little softcover volume (512 pages) looks at various stylistic movements, their leaders, and the key developments and innovations that have shaped our aesthetic environment. Chock-a-block with thousands of small color reproductions and written in an extremely accessible style, this book serves as a kind of field guide to the world of products. It is organized into sections on each of the various rooms in a house and chapters on leisure, transportation, the office, graphics, advertising, and packaging. Form, craft, detail, size, longevity, availability, and cost are addressed for each item. And more complex issues like the impact of assembly-line production, the phenomenon of mass consumption, the notion of corporate identity, the consequences of the design industry for the environment, and the effects of computers on product forms and their construction are explored as well. Also included is an A to Z of designers’ biographies, as well as a glossary of terms. –A.C. Smith

From Publishers Weekly
What’s amazing, after looking through Michael Tambini’s The Look of the Century, is how similar many things are at the two finials of this 100-year period. Clearly, those items most influenced by technology have changed greatly. The 1900 Graphophone, which played a cylinder, looks nothing like the Denon Stacking System D-90, which plays a CD. But design of the century has been marked by modernism, so Jean Puiforcat’s 1928 tea service isn’t unimaginably far from the Alessi tea set of 55 years later. Nor are watches or vases or chairs or fountain pens. But what’s most interesting about this book published by DK Publishing in Association with the Cooper-Hewitt, National Design Museum, Smithsonian,is to watch the (sometimes cyclical) development over time. BOMC alternate.
Copyright 1996 Reed Business Information, Inc. –This text refers to an out of print or unavailable edition of this title.

Book Description
From Frank Lloyd Wright to Vivienne Westwood, from sunglasses to sofas, The Look of the Century is the ultimate visual reference to the material world of the last ten decades. Developed in association the Cooper-Hewitt Design Museum, the book examines the objects of our century in a clear, compelling visual format, with lots of information on the century’s leading designers and movements.